With three great friends I have recently recorded the basic tracks for a new album of songs and the first and last tracks we did were takes of the song Grinding Wheel…the story of my life in a way, or what it might have been. 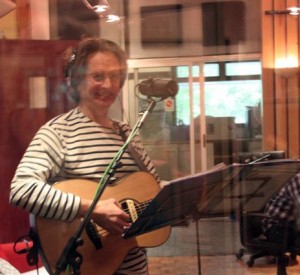 Henry Sparks behind the studio glass.

I know that I was lucky enough not to have gone down various possible routes in my life and that becoming a criminal in my youth was closer to me than I at the time realised. Probably what saved me was that I do not have the guts or cheek for the kind of lying required by that particular career choice. But I think bitterness and rage are not far below the surface of most people and if those feelings are acted upon there can be dire consequences. Some learn to confront these things and outwit them, others are not so lucky.

The idea of the grinding wheel comes from when I was about 5 or 6 years old. My father taught in Oxford and we lived out in the suburbs. Every Saturday afternoon my father would walk us (my sister and I, and later my brother) down to a railway crossing at Woolvercote which was not much used by vehicles so it never opened, or I never saw it open, and he would watch the trains go past.

His was not the romantic American hobo vision of trains as the way to the salvation of a different and better life down the line; but the interest in order and timetabling, that is engendered by a possibly slightly autistic mind. Railway timetables and his work on the original texts of the Christian bible were I think closer to one another psychologically than he ever realised.

At this crossing there was a manned signal box and the base of a long gone hut for railway maintenance. All around beside the tracks were rusting rails and parts of bygone railway paraphernalia. By the hut base was an old grinding wheel on a rusty steel stand with a real stone wheel about 3 feet in diameter and 6 inches thick.  Attached to the axle of the wheel was a rusty steel arm in a lazy S shape with a handle. I loved the fact that if one turned the handle the wheel went round and stayed turning for a good time after. Turn it I did!

From there it was a short leap from that childhood experience to analogies of work with ‘the daily grind’ etc. There are some for whom the cup is always half full. For me it is the reverse and everything is about to go badly wrong…life always seems a struggle.

And yet I know that is a ridiculous notion when I compare my life with that of others, but try telling that to my brain!