The previous to last song I finished (Sometimes She)…if one ever does, was under 2.30 and just as long as it needed to be. So I have no worry about the length of Carolina Says:. Put the two together and it averages out at about 4 minutes each. Not the best way, of course, to evaluating songs!

Carolina Says: is intended to be in the American singer songwriter tradition of Guy Clark, Townes Van Zandt, and Jackson Browne who let the songs take them. There is some English stuff in there too because of me. Of course there is the Lou Reed idea of someone says. Also Sprach…

I have been fascinated for a long time by works that only give us some of the story. I think of it like the caldera of a volcano, a ghost or fragment of an event. Pancho and Lefty by Townes Van Zandt is a classic example of this. For most of Paris Texas by Wim Wenders we really do not know what is going on and even by the end there is a lot of detail we still do not understand.

It is often better that way and the more detail we know the less interesting or romantic the whole idea seems. When I look back to important moments of my life, say my father’s funeral, I can only remember some parts: the tolling of a big bell, watching the red winter evening sun roll across the Romney Marsh as we put him in the ground, but no continuous narrative. Time compresses and is tangled, the detail is forgotten.

The events in the song are partly real and partly imagined but are all connected to the human saga and there really is not much new there. Although in traditional songs places are important, here the location is not specified and the story is international. 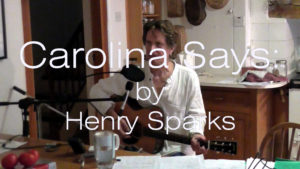 But I really did hear my father and my uncle playing the piano downstairs when I was a kid and it was magical. It still is magical to me though it is probably now a complete reimagination.