In April after lots of tooing and frowing in cyberspace I sent off all the album demo music and sheet music to Melbourne for Jenny Thomas, Chris Lewis and Dan Witton of Bush Gothic. It was a real relief to have all that done and have a quick pause of a day or so before I got on the plane for Australia. I had been trying to find a ‘house band’ to record with and having seen Bush Gothic perform on a number of occasions last year I asked them if they would do it. To my surprise and joy they said yes. I went with 12 tracks to work on. It was of course exciting to be in another place when I got there rather bongled by Jet lag.

I stayed in rented accommodation in Northcote for the first week which did the trick and allowed me to lurk about up and down the cosmopolitan (with a small c) High Street to get the feel of the place. Both Northcote, and Thornbury where I stayed for the second week, are great places to hang and the centre of Melbourne is easy to get to on the metro.

Dan explains the world to Chris

We rehearsed courtesy of Chris in a practice shed at the back of his house. It was very comfortable and I am grateful for the use of the facility. As Jenny had previously warned me Chris and Dan were very generous with ideas and things progressed usefully fast. At the weekend I moved into Jenny’s sister’s house in Thornbury ( Just North up the road and 2 metro stops) to cat or kitten sit whilst the family was away in Italy. It was lovely to have a house to spread out in whilst recording the next week.

The kitchen and living room was sunny and welcoming and looked out over a garden.

Bar on the High St Thornbury

A fine extra feature of this accommodation was a great beer shop and bar just around the corner at the end of the street. There I could buy stuff from all over the world, had I wanted, and also sample local beer but not proper draft beer. It is all pressure kegs. I recon that the first person who sets up a place in Thornbury that does beer either out of the barrel or on a handpump will become king of the hill. They have some great beer locally…I think it could be presented and taste better! You heard it here first…

Tram to Newmarket from Flinders St Station in Melbourne

tram to north Melbourne and Newmarket studio There I met Dave Mcluney, our engineer and ears for the week. We got down to recording the guide vocal and guitar tracks whilst the band was still on the road back from their gigs.

By midday the crew arrived and we got stuck into tracking. Due to the all round abilities of the crew (both in terms of playing and temperament!) we progressed quickly managing to get all 12 basic rhythm tracks recorded.

The Autumn leaves were beginning to fall into the street outside and the second week was decidedly cooler than the first. The studio is in a pleasant suburb of Melbourne with a handy Tai fast food shop around the corner for lunchtime tofu roll.

The Bush Gothic went off for another weekend on the road and I took a trip by train and bus to Yarmouth which is outside the bay of Melbourne (Port Philip Bay) on the southern ocean. It was fun to look south and think of nothing but 1000 miles of cold sea and then Antarctica.

We regrouped on Monday for a last day in the studio. There we did some vocals and in the afternoon Dan and friends Declan and Ros recorded a brass section for the ‘Great White Queen’ which swung from Heraldic to New Orleans based on horn parts written by Ant ‘Prof’ Johnson. What a finisher!

Hats off to Dave for holding it all together with acumen and good humor. Thanks to the band for looking after me so well and being so generous in collaboration. This exercise made me realise how joyful and productive musical coworking can be. Songwriting and playing is a lonely road  to walk down alone… 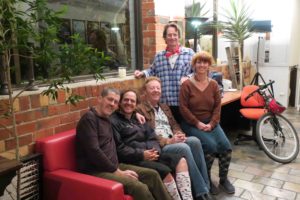 The crew after the ordeal L-R: Chris, Dan, Dave, Henry and Jenny

By the end of the session I had 2 copies of all my tracks copied onto two 64gig sticks. Nearly three weeks spent doing exactly what I love to do. An exhausting flight back and a book and a half later I arrived back in UK. Now the work of adding, unscrambling, and mixing begins. I aim to get the album out in January 2018.