Paddling in the Mediterranean off the beach in Barcelona just before Christmas I watched the containerships lurking offshore whilst my feet froze.

Bar Del Pi with a voyage in mind.

These ships are enormous, like whole city blocks moving about the ocean. They do not look elegant loitering offshore, more like a bunch of boys kicking around wondering when the trouble is about to start and how they can get involved. There is something about them (too tall perhaps?) that makes one think that they will topple over if a wave comes. That wave is normally ridiculously small in comparison with these mountainous piles of container jenga, but every once in a while one of these leviathans gets its comeuppance.

Because there is a rumor that my nephew is getting married I have been thinking recently about how to get from Canterbury to Chicago for the wedding without flying. None of this ‘Get in the tunnel that is aircraft shaped and step out at the other end as if nothing had happened’, let’s make the distance tell its own story by laboriously crawling across the face of the globe. Sometimes we would be so far from land that we would not see a glimpse for days; it would be less carbon but more expensive and extensive. How would it feel to huddle in the upper reaches of one of these mountains for days staring at nothing but sea? I am not sure if I like myself enough for that. 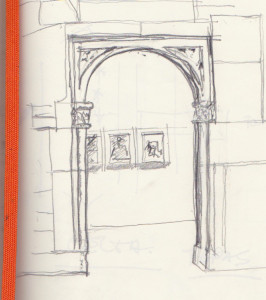 Back on land my feet felt good for the rest of the day after the Mediterranean cold therapy and the ships offshore reminded me of stories yet to be discovered. A friend once told me of people peering out to sea on the southern tip of Africa to watch the last working square riggers passing. They knew at that moment the world was changing irrevocably. Back when I wrote ‘Reaching for Ships’ I was thinking of the women who have cut through a crowd and left me mute with longing. They too are far away, out of reach, unapproachable, and of course, as always in these cases: mysteriously beautiful. The watcher is left in a state of delicious madness staring out to sea at a ship with a story as it sails unheeding by.

Listen to Reaching for Ships: https://henrysparks.bandcamp.com/track/reaching-for-ships