‘Life is a long long road, especially if you forgot something on the way out and have to go back for it! When do you just go on regardless?’

I posted this on twitter somewhat flippantly as I enjoy the to and fro of ideas and language as they catch one on the fly. Comments like this rarely bare the scrutiny of another look and quite rightly are treated as the cyberdrivel that they probably are.

It occurred to me later that forgetting something on the way out to somewhere and having to go back for it is exactly what artists are doing all the time with their work. It may even be the ‘definition’ of an artist. It makes the progress/process of creation/working slow.

Just when I have set sail on a course, with the idea in my head that I will follow that direction to the bitter end, I learn something new, or hear about someone that I have never heard of before.

Imperceptibly the wind changes, the sky is different and the direction is altered. I will never be the same again, hopefully in a good way. The day this stops for me will be my end.

It can be a chance hearing on the radio, a mention of a tune by a friend, or more usually these days an artist’s death which, through the media circus, forces a reevaluation of their work.

Sometimes the effect of a new discovery is profound and the artist (for instance Woody Guthrie) changes me radically. This may give me a boost in a new direction or I may have to go back to the starting line and ask why am I doing this at all? It is hell to suddenly realise that the floor has just given way, you will never be another Barry Manilow (fill in your own guilty secret here!) , and all you thought was important is so no longer. Some times it is more superficial and does not fuel weeks of depression and self doubt. But it all goes into that compost that we use to create. My progress is always destined to be, at best, that of a demented crab…or even less reliable. You only discover where you are going by trying to get there!

When do I just go on regardless? I don’t think that I do that any more. I now realize that those daily discoveries can be important and even the most mundane mid 60s teen pop idol may have something to give me even if it is only: ‘DON’T DO THIS! When I have the time I even glory in these wayside discoveries and spend time savoring them, and if I don’t, they have to go into the pages of the notebook to be quarried out later. 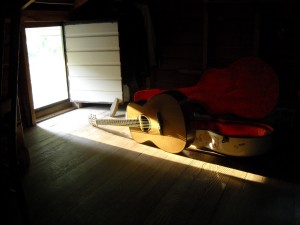 I think that those who strap in tight and head for the stars tend to miss the wierdness and other junky interesting informative stuff on the way. Yes they definitely get there but it may be a pretty bleak landscape on arrival with baggage lost in transit.

So when am I going to get an album finished…well if all these musician types would just stop dying then I’d have a little peace and the crab might become less demented and move in a straighter line!

…always these excuses! Oh and by the way, to finish what I started, any time I hear a singer singing about how hard the road is it makes me want to throw up.